It’s so easy to do daily updates on Facebook that I forget about the blogging side of things. So once again, here is an update covering a couple of months.

Mid December I caught a bug and had to come home. It was just a winter cold but my energy levels were sapped leaving no option but to rest. I enjoyed a great Christmas at home with Sylvi and was on the road to recovery when I got the dreaded gout again. Not as severe as before but enough to make me hobble around for a week or two.

By the end of January I was much better and went for several long walks with no ill effects. I decided to go back to Wales on the 31st Jan 2018, starting in Tywyn where I had left back in December. The following day was my years anniversary of walking. I set off from London on the 1st Feb 2017 and in the next 365, I walked for 180 days covering 2800 miles.

Memories came flooding back and with the aid of pictures on facebook, I became quite emotional as I started my walk from Aberdovey to Machylleth. Thoughts such as “If I had remained well over that year, I would have finished by now” surfaced but were quickly dismissed as I knew realistically this was never going to happen to someone walking with a suppressed immune system. What amazed me that day was the amount of people still following me (not literally…..that’s creepy) and still encouraging me. It truly is lovely to see and helps me every day.

Tywyn to Aberdovey was a short 6 mile walk along sand to start off again and to get the little legs working. With the wind behind me most of the way and mixed weather it turned out into a glorious multicoloured sensory overload. The sand wizzed past me along the beach, each grain looking like it had overslept and was late for sand castle duty. It looked amazing both facing the wind and away from it.

Aberdovey looked pretty in the sunshine and even better when I returned the next morning to start the next leg. The A493 clings to the Dyfi Estuary and would be the more direct route but the road looked a bit to dangerous to walk on for 10 miles. I decided to follow the Wales coast path which took me from 0ft to 800ft within the first few miles up into the hills. I cursed my body over and over again until I reached the peak and was rewarded with a great view over the estuary and also a peak at the next day’s walk. The rest of the walk was boggy and I went shin deep in mud many times. The only fun part is the noise when you eventually pull your boot out.

Machynlleth! I still can’t spell it let alone say it. Once over the cute little bridge the little town has an impressive clock tower. I sat in my car exhausted but chuffed that I had done 11 miles with 1200ft incline whilst slowly having a mud bath. I answered some press enquiries before heading off. An interview for the local Cambrian News was arranged and also an interview as part of an article in The Guardian on Volunteering.

The next day saw me finishing the day back on the coast at Borth. It was an uneventful walk with long stretches on the road. There were several straight boring sections towards the end where I amused myself by making lists of favourite sandwiches (fish finger won) favourite thing on toast (cheesy beans with brown sauce) and favourite wrap (None- I don’t like rap) 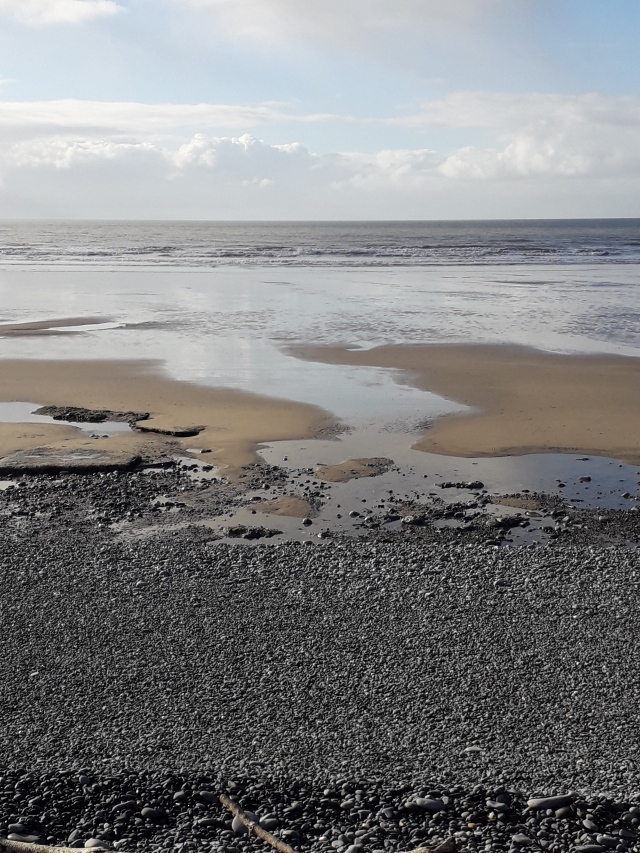 So, I am back and I will try, once again, to blog more often. Cardigan Bay this week. 🙂